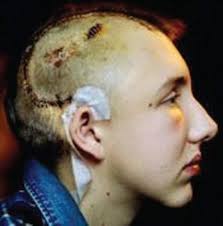 In 2010 Alfie Meadows was an unknown philosophy student at Middlesex University.  He was one of the many to have taken part in a student protest regarding the proposed increase in tuition fees.  Following that protest, Alfie endured emergency brain surgery having been hit in the head with a police truncheon.

Alfie and fellow protester Zak King, were later charged with violent disorder.  The pair were tried in the Crown Court in front of a jury.  Neither were convicted, nor were they acquitted.  That jury couldn’t agree on a verdict, and so they faced a re-trial.  The retrial was aborted and so now, in February 2013, over two years on from the protests, they are on trial for a third time. 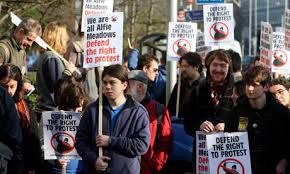 Violent disorder is an offence under section 2 of the Public Order Act 1986.  The offence is committed where three or more individuals, present together, use or threaten unlawful violence, where their actions would cause a reasonable person present at the scene to fear for his safety.  The offence is an “either-way” offence, triable either in the Crown Court in front of a jury, or in the Magistrates’ Court in front of a lay bench of Magistrates, or a District Judge (or deputy).  In the Crown Court, the maximum sentence is five years, and unlimited fine, or both.

Alfie Meadows and Zak King are being tried in the Crown Court, and therefore face a significant prison sentence should they be convicted.

Leaving the evidence aside, as the third trial is ongoing, Alfie’s case raises various questions about the justice system.  What should be done when a jury or a lay bench of Magistrates’ cannot agree on a verdict?  Should the matter always be re-tried, or is there a risk that, given the fact that the evidence is likely to have been reported in the press, the new jury or lay bench would have heard of the case, and already formed a view?  Is it always in the public interest to re-try every case?   What about summary-only offences?  These are the less serious offences, which can only be tried in a Magistrates’ Court.  Is there a public interest in re-trying these offences when a verdict cannot be determined?

Photos courtesy of socialistrevolutionary.org and guardian.co.uk

7 thoughts on “Alfie Meadows and the right to protest”